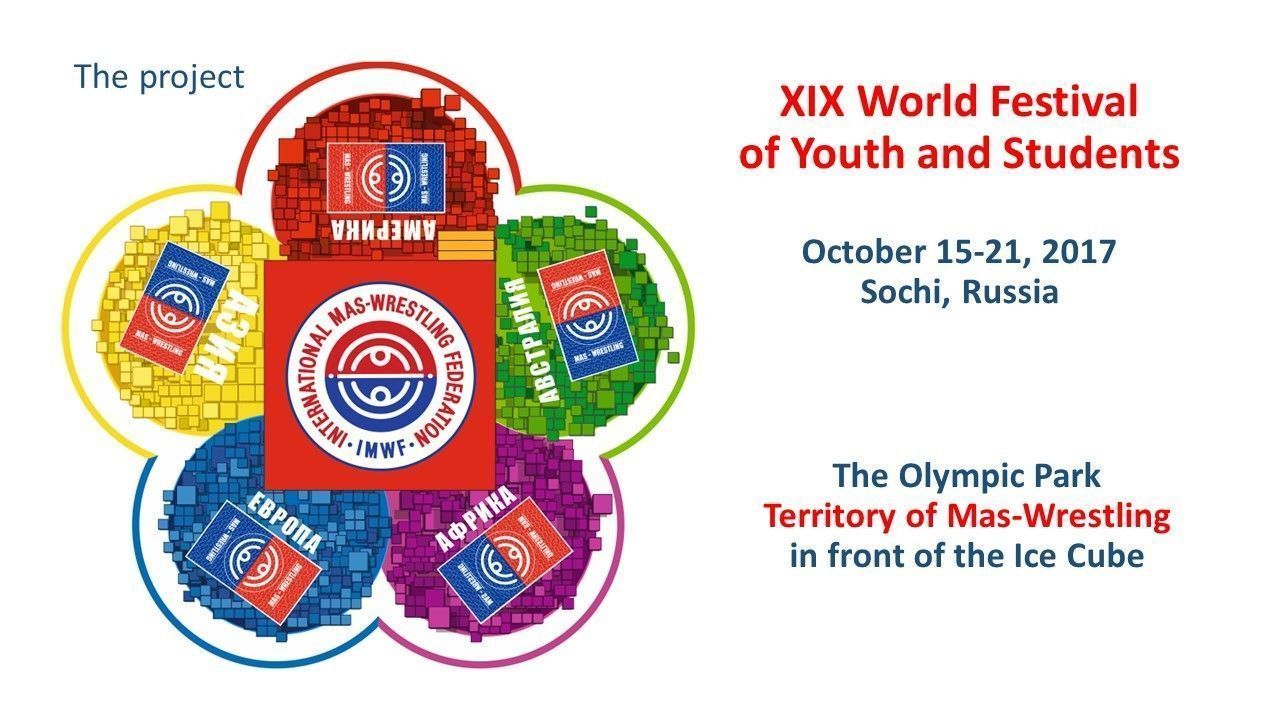 Let us to tell about the Presentation of the draft “Mas-Wrestling territory” where during the World Festival of Youth and Students in Sochi will gather our young colleagues who develop Mas-Wrestling around the world – from Australia and Oceania to South America.

How exactly will be presented Mas-Wrestling on the global world arena? This question worries all admirers of mas-wrestling. It will be seen not only by guests of youth meeting, but also the spectators of more than one hundred sixty countries of the world.

At first, it is the Mas-Wrestling block in the performance of sports of the Russian Martial Arts Union which will be presented to many thousands audience in two days. The block of Mas-Wrestling is the colourful duel of mas-wrestlers with cultural part.

Secondly, it is a daily work during all days of the Festival with the peak moments, when the Mas-Wrestling best athletes will make their master classes, and then competitions with good prizes from the sponsors will be orginized. And at the end will be the uniting Yakut round dance “Osuokhai”.

The venue –“Territory of Mas-Wrestling”. What it will be like?

Imagine, six Mas-Wrestling platforms in the form of flower – the logo of the Festival will be located on the open zone of the Olympic Park in front of the Ice cube. One platform will stand out against general row. It is the platform 1 meter in height and 6 to 6 meters in perimeter. It will be the center of the “flower”. On the very same place on the platform to be held master classes of Mas-Wrestling best athletes with logo of the International Mas-Wrestling Federation. On platform`s perimeter will be logos of National Mas-Wrestling Federations from five continents. Around the main platform five petals - red-and-blue floorings with Mas-Wrestling inventory will be located on banners or special coverings. On “petals” will be held the main presentation work.

Presentation will be held during all days of the Festival – from October 15 to October 21. On this very place any interested person is able to gain Mas-Wrestling basics, practice and try himself in real Mas-Wrestling matches. Winners of the improvised matches will be given badges or magnets with logo/symbol of the Festival, Russian and International Mas-Wrestling Federation. And some of athletes will be suggested to compete in Mas-Wrestling tournament, which will be carried out daily at certain time after the master classes with the best athletes. Motivation – communication with the best ones and special prizes from the sponsors.

Who will organize master classes?

Who will work on the Mas-Wrestling platforms?

The main staff of the working experts will be from the Republic of Sakha (Yakutia), but colleagues from regions and countries will join them. Representatives from the countries is decided to invite to peak times. Applications for participation in the Festival were submitted by youth from 17 regions and 18 countries. The quantity will still increase since the time of the end of registration is prolonged: May 1 – for Russians and May 15 – for foreign participants.

Volunteers speaking English will work with guests from other countries, for work on the areas, protection of personal belongings in tents, cleaning of the territory, providing of water and attraction of the audience.

At the end of each competitive day the press has to prepare the report for the Organizing Committee for news line. All materials have to be published in media immediately.

The above described draft is in process of discussion with the Organizing Committee of Festival now. On the main moments were reached mutual understanding. Now the main question still remains the inclusion of our colleagues in staff of the countries and regions of the Russian Federation delegations.

Therefore I ask to all people, who sent their data, to register themselves on the website of the World Festival of Youth and Students. And we will surely meet each other in Sochi and we will dance our general round dance of friendship of “Osuokhai” in the Olympic Park!